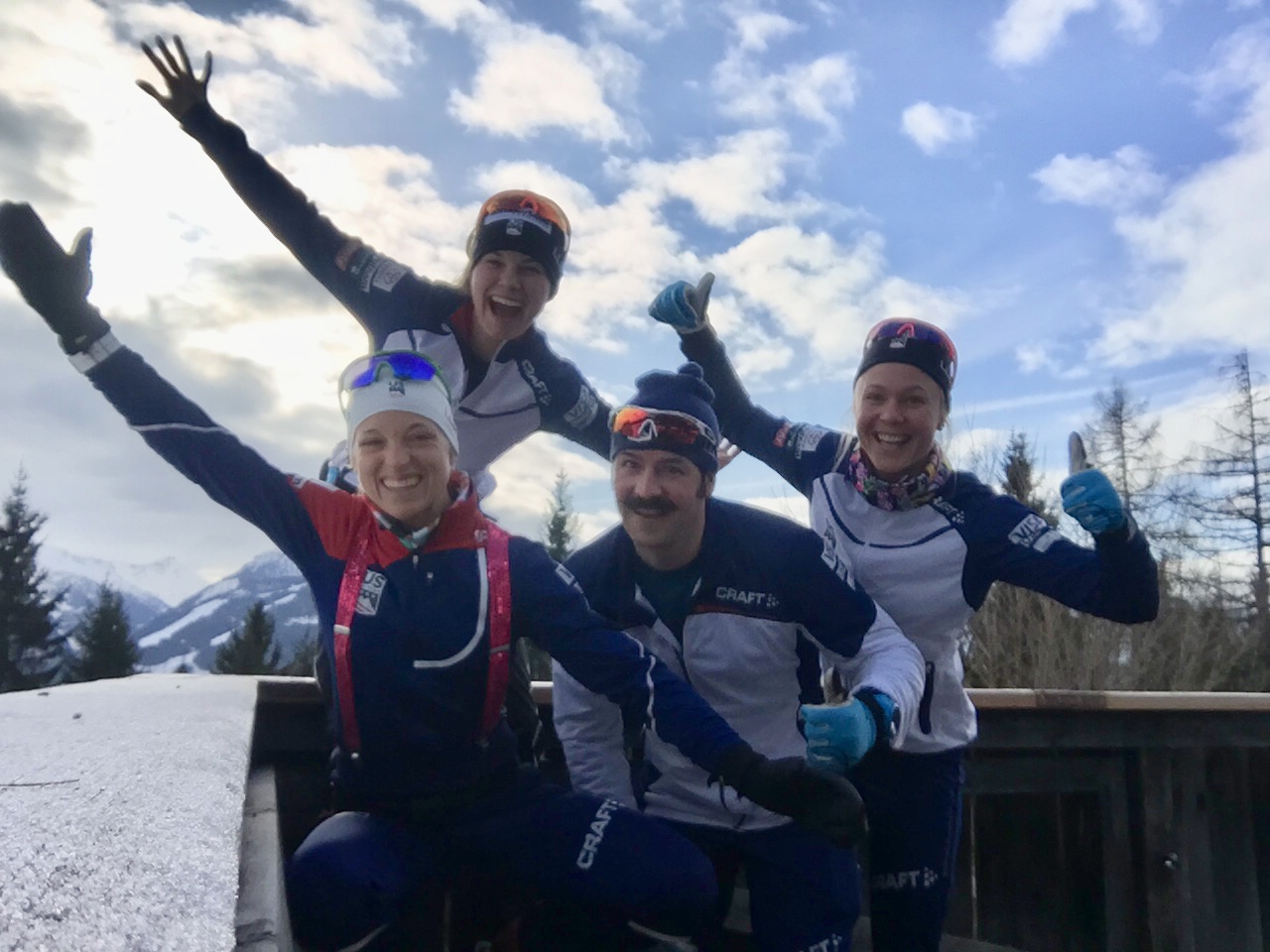 Tour life – the good, the bad, and the smelly jackets.

It’s tradition for the girls to come back up the mountain and cheer on the boys in the last stage of the Tour de Ski. We always get to race first, which must be truly horrible for them (sorry boys), because they have to sit and wait all day for their turn to completely flood their bodies with lactic acid. They get to watch us do it, see everyone collapse across the finish line, and they know what’s waiting for them. That said, I love getting to cheer until I lose my voice, letting my teammates know that we’re still up there and we’re still yelling for them.

“You mean there’s MORE of these gates?!?!?” (photo from Fiemme Ski World Cup)

There’s something wonderfully awkward about trying to cheer on people going up a 28% ski slope…because you get a whole lot of time with them. You could, in fact, read  “Green Eggs and Ham” while walking next to them. That’s how nonexistent the glide is on the steepest parts. That’s why I don’t cheer on those parts. I like the last wall right before the false flat that marks 800 meters until the finish, because that’s the longest 800 meters of your life. And you need everything you’ve got to get though it! The “flat section” at the top

And anyways, what can you really say to someone who’s clearly in so much pain that it’s etched all over their face? It’s taking everything they have just to stay upright and not collapse in on themselves. At least, that’s how I feel when I’m racing up Alpe Cermis. I think the best cheer on the World Cup may just belong to our head wax tech, Oleg. His voice is a bass foghorn that reverberates in your bones and is a simple command: “GOOOOOOO, Jessie, you MUST GO!” Let me tell you…when The Oleg tells you to go, you will turn yourself inside out just to get a half second faster on the clock. Trying not to be awkward while cornering the gates

Everyone wants to know what you’re thinking while going up the climb, and for me, it’s disappointingly simple. I just force myself to keep moving forwards one step at a time, and sometimes that’s by counting to 10. Everyone can always take 10 more steps. Then I start over again. And over, and over. Sometimes I’m telling myself to stay upright because when I get tired I tend to fold in half. And towards the end, I’m telling myself that despite the fact that I’m falling apart I’m GOING TO MAKE IT! No matter what I’m thinking, it’s going to be positive. My one rule is that I ONLY ever say nice things to myself on race day. I wouldn’t ever turn to a teammate and say “wow, you are kind of sucking right now”…so why do we sometimes say these things to ourselves? It can be the hardest thing to be as encouraging and supportive internally as you are to someone you care about. Once I figured out how to be a cheerleader for myself as well as others, things started going better during the toughest race moments. But I’m going about this backwards! I started with the most exciting part! The final climb is usually what hooks everyone on the Tour because…well…just look at the course profile. It’s the only one you’ll ever see that looks like that in an XC race.

Thanks Ingvild and Heidi for the awesome cheering! (photo from Fiemme World Cup)

Here’s a short rundown on the other venues!
Lenzerheide:
That sprint day, man. I didn’t think it was possible to get my poles kicked twice in the same race, but what I WAS proud of is the fact that I never gave up. It would have been pretty easy to throw in the towel and hey, nobody would have blamed me! But I raced like I had nothing to lose because, well, I didn’t anymore. And I was surprised with how good I felt all day! And so, so psyched for Sophie on her podium! The Tour team and our adorable flag bearer after opening ceremonies!

Same thing the next day – Bam! Sadie on the podium! That was so fun to see! The course that day was the closest thing to a roller coaster ride I’ve been on in a while. It was icy and klister skiing, so you just had to send it down the icy corners and pray that your wax didn’t pick that particular moment to start working. I had a really fun moment that I hope wasn’t caught on camera on the final downhill corner into the stadium. I held my tuck a little too long and came into the corner hot, and for a second I was on one ski, my arms making the panicked “rolling down the windows” motion. If there was ever a time skiing looked less graceful, I’d love to hear about it. I can’t believe I didn’t fall down, but then again we all get lucky sometimes!

My parents and puppy watching every race, usually starting at 5am! I’m so lucky!

The 10km pursuit was a lonely race for me, and I loved every second of it. I race best when I get space to do my own thing and live inside my own head, and I sure had it that day! Then it was time to give my podium cheese to the wax techs (JP makes a killer fondue and keeps the setup under his wax bench. Gotta love the French), pack up our bags and drive to Germany.

Jumping for joy for my first podium of the season!

Oberstdorf:
My goodness. I feel for the organizers there. Every single year they do an absolutely incredible job getting the races ready, the volunteers are possibly the nicest on the World Cup and they really DO have the best food. They serve banana bread, so they’ve got a very special place in my heart. But the weather has a mind of it’s own and apparently, Mother Nature has some serious beef with Oberstdorf.
We knew the rain was going to be crazy, but what we didn’t expect was a thunder and lightning storm with gusts of wind that blew away the giant banners covering the trail, ripped sponsor boards from the stadium and flung them across the field, and sent an 8ft x 8ft inflatable sponsor cube bouncing up and over the German wax truck and into the woods (that was my favorite part, if we’re being honest). And nobody foresaw the forest falling down across the course. But that happened, too. So you just never know!
Honestly, my first thought when the lightning flashed was for the Dario Cologna fan club boys with their giant metal cowbells. “Put the bells down, boys! It’s not worth it! Dario will still love you!” We kept warming up in the storm, expecting the race to be cancelled, but when it wasn’t we just sent it and raced. And I had the best feeling I’ve had on classic skis all year! The klister skiing in a rainstorm is really out of this world. The boys were all sitting around in the FIS Family tent, watching the TV and trying hard not to laugh at the absurdity of the wind. Then the race was cancelled, which made them all look like geniuses for not warming up. Sometimes you can’t win!
Because of the trees the 10km mass start skate the next day was the most impossible course to break away on that I’ve ever raced. Not for lack of trying, though. There was a pretty fun moment in there where Sadie and I were side by side in the front, controlling the pace, but then we each had our falls and the moment was over! I hit a patch of ice that opened up on the final downhill turn, skied into the boards and managed to whip a 180 all without breaking a pole. Which was kind of amazing, if you think about it, given my recent luck. It was less amazing losing about 20 places in those 15 seconds I was down, but all in all, it didn’t derail my tour which I was extremely thankful for. The final five – Sadie, Rosie, me Liz and Paddy hanging on for the full TDS!

Val di Fiemme:
The 10km classic mass start felt like we were sprinting right from the gun. Which is how girls race on the world cup. Nothing held back, ever, until you just kind of die off and fall from the lead pack. It’s a gutsy way to race, and a harsh one. But it’s really fun when you can keep holding on longer and longer every year! This was a good race for me, and I was psyched on it! Then I went to bed with a massive knot of nervous energy stuck somewhere between my throat and my heart. I think my favorite moment was hearing Ingvild and Heidi screaming for me. Sportsmanship like that gives me goosebumps! (photo from Fiemme World Cup)

After the Tour was over, we drove to Ramsau, Austria, which is ridiculously beautiful and has so many kilometers of groomed trails that I still haven’t skied them all! It’s been an awesome break and rest from the intensity of Tour life, and I’ve done a lot of cooking and baking, sledding, laughing, (and yes Mom, laundry too)! The night sledding in Ramsau is AMAZING! Tommy, Sadie, Cork, me, Liz, Paddy and Jo.