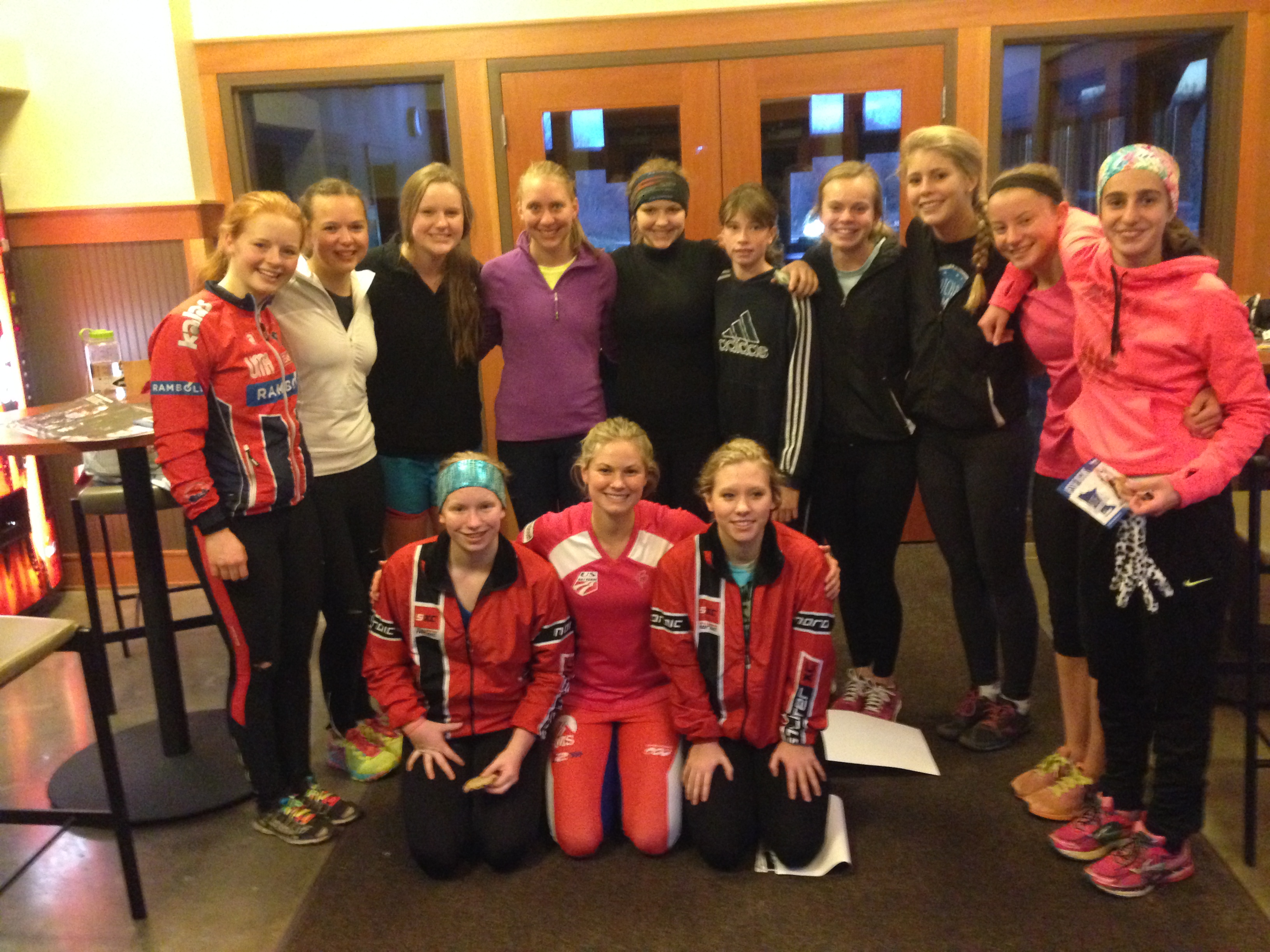 The week that flew by

Whew, we made it! After 27 hours of traveling, 4 flights and a whole lot of time zones, team USA checked into the cabins in Muonio, Finland. We are here training until next tuesday, and the groomed 6km loop of natural snow has been great! While there are a ton of athletes out hammering loops, it’s a large enough area that you can find space to do intervals or speeds without running into other skiers. We are living in these cozy little cottages, and because it’s Finland, each one has this amazing sauna inside! Although I think we use the sauna more to warm up after skiing in the cold dark afternoons instead of how they were intended to be used. More details from Muonio to come soon…but first, I want to fill you in on the busy, fast and extremely fun week I had in Minnesota and Stratton before jumping across the pond! The first big snowfall for Minnesota! A snowy view up my driveway.

I was in Minnesota for only a week, but I somehow managed to pack a month’s worth of things into that time! I led a bounding workout with the Stillwater High School girls team, and played games with the St. Croix Valley Ski Club kids before showing them photos from last season and talking about what it means to be a professional skier. Some of the Stillwater High School girls after our bounding and running workout!

I also had the opportunity to speak at Slumberland Furniture’s conference, and tell everyone how the Olympics went! This was really cool for me, as Slumberland has been my headgear sponsor for many years and it was great to be able to connect to all the stores. I spent an afternoon with the fun crew at Podiumwear, taking shots of the new suits, designing my new line for this coming season and going through the process of making a suit! Working on the design process with the crazy talented designers at Podiumwear! And yes, they do have a pinball machine at the Podiumwear factory. So that’s pretty cool.

One morning, my Dad hauled me out of bed early to help him drag the deer he shot out of the woods. The dogs were going absolutely nuts, it was opening day of hunting season, and we were set up with enough red meat to last all winter long! Although my week was busy I found ways to spend father-daughter time, like field dressing deer, going for roller skis, or reading in the living room with the dogs. And I got mother-daughter time when we went running in the park together, at the gym, and cooking up some delicious dinners! I even got to see my little sister around her busy theatre rehearsal schedule! Dad and his buck!

The biggest event of all was the Chilkoot fundraiser dinner, which was originally capped at 50 but we somehow managed to squeeze about 60 people into the restaurant for the evening! This fundraiser is important to me because although I am on the USST’s A team, have access to the team’s resources and am mostly funded, there are many weeks in the summer where I am responsible for training costs and the odd non-racing week in the winter when I need to fund myself. Not only did we raise money for my skiing, but the community raised about 1,500 for the National Nordic Foundation as well! It’s really awesome to be able to support and push forward the future of US skiing by lowering the trip costs for junior athletes to compete in Europe. Giving a slideshow talk about how summer training has gone, and what’s up next!

What is really cool to me is that talking about the Olympics with my hometown community was a full-circle moment. Last February, the Chilkoot Cafe opened their doors at 3:30 am (AM!) and 200 people packed into the main dining room. A screen and projector streamed the women’s 4x5km Olympic relay, and everyone cheered and screamed and watched the entire race. I wish I could have been there to see it.

But on November 9th, I finally got to hear the cheer that has been building up and waiting for me since last February. I think the noise shook the building! It was so inspiring. And our relay event at the Olympics didn’t even perform nearly as well as we had hoped! I think that’s what I love about it…at the end of the day, it’s not about cheering for me, or for the US Women’s team. It’s about the love of the sport, about being inspired by it. It’s about watching someone tackle a seemingly impossible task and give it everything they have, win or lose. It’s about community and rallying around cross country skiing. And that is amazing, a truly special thing, and I feel so lucky to be a part of it! Then I flew over to Stratton, Vermont to spend a short 3 days with my club team, SMST2. It was great to see everyone one last time before we part ways, with half the team headed to Europe and the other half headed to tear up West Yellowstone. We had another fundraiser dinner the evening before we flew out, and it was such a fun evening of good food, friends, support for the team and a wonderful send-off to motivate us for the next 5 months! The Marstons won a live auction item – the SMST2 girls team will be cooking dinner for his family and guests this spring! I guess there was a lot of salt on the roads because my previously black tights came back from a roll looking like this! Yikes!

The morning that we left it was Annie P’s 22nd birthday, so we played a ton of Taylor Swift’s “22” song and had a lot of goodbye hugs. It probably wasn’t enough hugs to last 5 months, so I’m hoping we’ll get to see our SMST2 team on the road in Europe this winter!