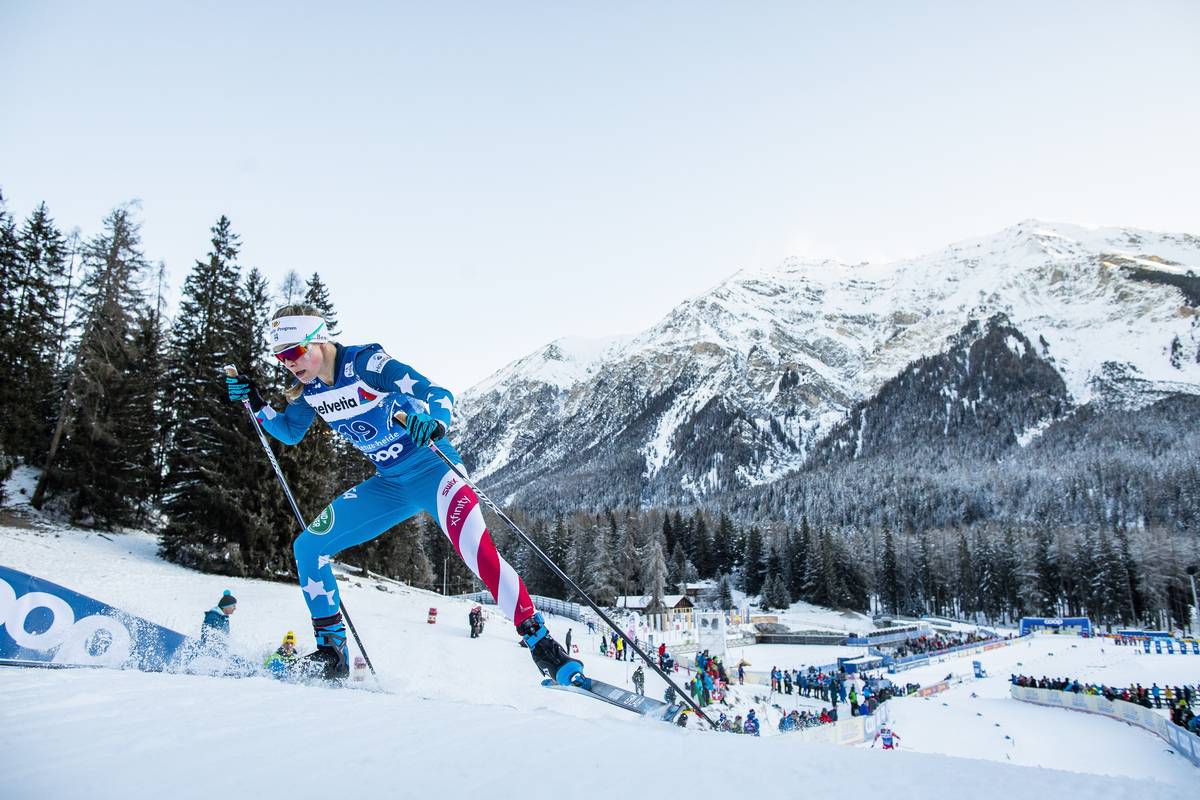 The Tour test of positivity

I didn’t mean to completely block the finish line by collapsing a mere two feet from it. When I finally dragged my tired and completely flooded body across the red line in the snow at the top of Alpe Cermis, my ski hit one of the pine boughs marking the finish, I tripped, and that was it. Once I was down I wouldn’t have been able to get up even if you were waving free tickets to Disneyland in front of my nose.

I was so out of it that it took a good 30 seconds before I realized that the GPS pod in the back of my bib was digging into my spine. I treated it the same way I reacted to the spit I was sure I had all over my face: annoying, but still don’t care enough to do anything about it. A really deep sense of satisfaction started to soak in about the same time the snow melted into my suit; we had made it to the finish. We were done with the Tour.

Except, of course, for 90 minutes later, when I was trying to run alongside the boys to cheer, wheezing and coughing and shamelessly using the boys tall spare poles to push myself up the slope.

This was my 8th Tour de Ski, my 7th time completing the whole circus (I got sick one year partway through). That either makes me crazy and brave, or crazy and stupid. I’m still not sure which one it is. I feel like every time I do the tour, it teaches me something. How to deal with pressure, how to keep the focus going day after day, how to be smart about recovery, how to be more resilient. This year, I think it taught me how to hang tough after disappointments and be a better person. I have never been more proud of my team than after this tour.

As I learned from racing Period 1 of the World Cup, nothing is hard when it’s all going right. When your fitness, your body, your skis and your wax are all in a great place, you race absolutely as hard as you can…and sometimes, you get to step onto the podium. It’s not hard to be happy, to be positive, to smile. But when you race as hard as you can and your skis aren’t competitive, you’re injured or a crash takes you out, it is the hardest thing in the world to be positive after the race. That’s where the true test of mental toughness lies; what do you do when you’ve given it everything you have, and it doesn’t work out the way you know it could have? Do you throw a fit at the finish line? Do you smash your poles into the fence? Do you yell at the coaches and techs? Or do you straighten your spine, hold your head high and remind yourself that if you did everything you could as well as you were able, you should still be proud of yourself and the effort you gave?

I want to be the racer that’s still fun to hang around after it all goes wrong. What you act like after a tough day says a lot about who you are…but the best part is that it’s completely within your control. It’s something I’m always working on. It’s easier said than done, and I’m the first to say that I haven’t always been proud of how I reacted after a disappointment. But one of the benefits of getting older and having done hundreds of races is that you’re more easily able to put it all into perspective, and remember that how you carry yourself after a bad day speaks to your character more than how you smile after a good day.

So no, this tour wasn’t even close to what I had dreamed of, what I had trained for, or what my team and I know that I’m capable of. But I earned the right to be proud of myself for how I stayed positive, gave it my all day after day, turning myself inside out pushing hard for the finish line even when I had no kick wax or when I was getting passed right and left. It’s not a secret that we struggled on a few stages with having competitive skis this tour, but it wasn’t for lack of effort, and in truth that’s just part of this sport. It’s never fair. Someone always has the best skis, someone has the worst, and you have to accept the fact that the playing field will not be equal. But that’s never an excuse to give up or stop trying.

We missed the wax outright in the first stage in Lenzerheide, and it was a tough day for the team. But when we got to the wax truck, there was no yelling, no tears, no accusations. I told the techs that I believed in them and I knew they would nail the wax the next day. Because here’s the thing: I know that they are always giving their best effort, and I know how hard they’re working. And I have no idea how to wax skis. There is a 0% chance that I would have done a better job, and a 100% chance that I would have messed it up were it me in that truck. How could you be mad at someone for giving it their best shot, especially when you couldn’t do it yourself?

And you know what? The next day, the techs totally nailed it, we had a great qualifier for the sprint as a team, and Sadie and I both made the finals. It was a sign that our fitness was there, and we had to trust that our training had worked.

For me, the tour was a test of positive energy and a can-do mindset, looking for every chance to keep pushing my body as hard as I could to regain lost time after a few tough days interspersed through the tour. I was more proud of how I hung tough than the podium I snagged on stage 6, although that was also an extremely fun day! All that belief and trust in my fitness paid off, for when I had the great skis to match, I knew I could hang in there and ski a great race.

We had a really awesome crew doing the whole tour this year, and it made me excited for years to come. It was so fun to see Rosie and Sadie have new TDS personal best finishes, to see KO crush her first ever tour, and to see David and Logan rocking the men’s side and mixing it up.

The tour takes so much from you; your energy, your mental toughness…your sanity. But it gives you so much in return. A confidence boost, a fitness boost, a renewed excitement for ski racing. All that said, as much as I adore the adrenaline rush of the Tour, it’s equally important to find a way to shut it off and reset in the weeks afterwards.

Heading to Ramsau for a week of nice relaxing skiing in the sunshine, sledding at night and eating strudel after skiing up to the Alm would sound amazing no matter what, but getting to have my boyfriend Wade there made it the happiest week I’ve had in a long time.

Now we’re headed to Nove Mesto, Czech Republic, to get back into the World Cup racing scene with a two-day pursuit weekend. Saturday will be a 10km skate followed by a 10km classic pursuit-start race on Sunday, and I’m happy to say that after a refreshing break I’m once again excited to pull a bib on!