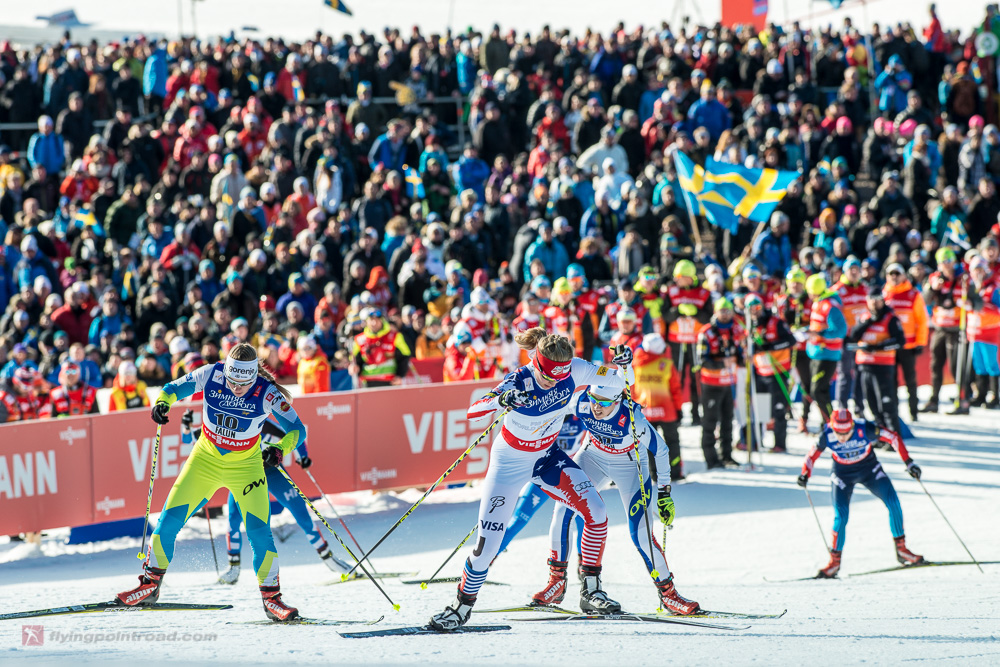 I’ve now done a grand total of 4 team sprints in my life, and each one has been a crazy mix of excitement, nerves, fun, mind-numbingly painful leg burning, and adrenaline. 3 of them have resulted in podium finishes, and yesterday’s in 8th place, but ALL of them have equally helped me grow as a racer and as a person. All of them have been a fun experience that I wouldn’t give up. All of them have inspired me and kept me hungry for more racing in the future. And in all of them I have been so proud to be a part of this team – the whole team – my sprint partner, the techs, the coaches, all of the athletes and staff and supporters that makes this possible!

Was the result yesterday what we were hoping for? No…but did we ski with everything we had? Did we keep fighting to make up time? Did we cross the finish line knowing we did everything we could? Yes! So I am keeping my head up high. I am so proud of Sophie and how she skied, and I am lucky to have her as a team sprint partner, teammate, friend and year-round training buddy. I had so much fun racing with her and being nervous with her and jogging around getting ready to race. We knew going into the day that if everything fell perfectly into place, we had a chance at a medal…but of course so did a lot of other teams and we weren’t the favorites this time around. It was nerve-wracking and fun getting to wear that defending World Champion bib, but there was no mistaking that we were the underdogs this time around! Racing in the semifinal (photo from FlyingPoint)

Both Sophie and I were so extremely nervous DAYS before the race! I have been visualizing racing on this course since May…no joke. Which made me nervous because I have been looking forward to this race for so long, but also calmed me down because I knew that I had done everything I possibly could to prepare for it. So although the course was closed to all athletes and techs in warmup, by the time I started racing I felt like I had already raced on the sprint loop hundreds of times!

In the qualifier our goal was to move on to the finals using as little energy as possible, especially since we had the disadvantage of being in the second semifinal. It really stinks, especially for the boys with even less rest, when you’re put into the second semi because you get 30 minutes less rest than the teams in the first semi before the final round. I don’t know if there’s a fair way to do it, but knowing you have less rest makes you want to conserve energy as much as possible! So the first two laps we skied in the middle of the front pack. I had one crash in the tag zone the first time I tagged back off to Sophie, as the tag zone snow was so much faster than anyone had anticipated and skiers were tagging off but then gliding way past their teammates! I tagged Soph but didn’t have any room to get out of the way before running into the back of a German girl’s skis, and down I went. But I didn’t break any equipment, slow down Sophie or slow down other skiers so it was all ok!

Sophie skied really smart, letting the other girls lead and then when she was forced to lead, slowing it down so that she could conserve energy for later in the day. When we tagged off for my last lap we were only 9 seconds down to the leaders and in 4th position. I figured I could gamble on being lucky loser, or pass the two teams in front of  me and finish 2nd to secure a spot in the final, so I went for the second option. Once I opened up a little gap and was sure that we’d finish second I coasted into the finish, and although I guess there’s no way to know for sure I felt like it didn’t take too much out of me because I skied the second half of the course slower. Then it was time to quickly change clothes, get some food and drink and cool down. I was excited and pumped up and ready for the final!

In the final Soph skied a brilliant opening leg and tagged off with the lead group, and I mimicked her strategy, skiing right in the back of the pack and then easing up over the top of the big climb because I knew I could catch back up drafting on the downhill. Did I mention how great our skis were? I was super impressed with our techs and coaches getting us such good boards!

The second leg I had a little catch-up game to play, and I was skiing a little bit in no-man’s land trying to get back onto the lead pack. I think I loaded my legs a little too much, because in the final lap I felt pretty toasted. I made up the 4 seconds to Switzerland but then had nothing left in the finishing lanes, and I swear I meant to lunge at the line but when I tried to stick my foot out I just folded over instead! That’s how I know I really spent it all out there.

The best part of the final, though, was when I collapsed at the finish and Sophie was right there, hugging me and helping me get my skis off and telling me she was proud of me. No matter how the race went, I was so happy to race it with her and it meant so much to have her there as soon as it was over! And I’m glad we had each other there for support especially when going through the mix zone of media and reporters, which can be overwhelming and also hard right after a race when you’re head is spinning and you’re emotionally through the wringer after days of being nervous and then racing your heart out.

And of course, after I got home I got this awesome note from my Mom and Dad, who were up in Hayward, WI for the Birkie weekend with a big group of friends, all of whom got up at 5:30am to watch the semis then the finals. Thanks for the cheering guys! The gang up in Wisconsin for the Birkie weekend, watching the race! (photo from my Mom)

At the end of the day, I was proud of how we skied. I think I skied with the same intensity and drive as I did back in 2013, and although I don’t know because I wasn’t skiing with them the whole race, I feel like I could have kept up with that lead pack and caused some trouble! 🙂 So it was a great confidence booster, and I feel like I am in good shape right now, and as long as I can recover in this one day off, I am super excited to see what I can do in the 10km skate race tomorrow. *For those of you who read the Fasterskier article, there were a few errors that I’d love to correct: I fell twice during the day but one was in the semifinal and one was in the final, not both in the final like the article suggested. And I had tagged Sophie before my fall so it didn’t slow down our relay or change the outcome of the race – I fell because after tagging off I was still gliding faster than the girls getting tagged around me and I had to space to move out of the way. I figured it was better to maybe stumble and fall than come to an abrupt snowplowing stop and risk ruining someone’s race and getting yellow carded.