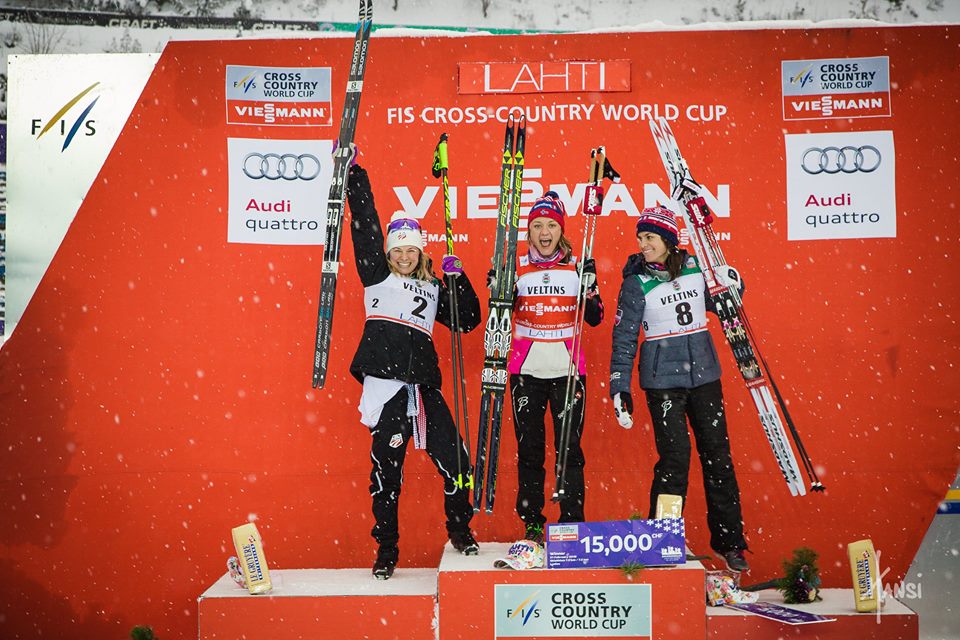 One last exciting week in Europe!

By Jessie February 23, 2016 No Comments
The sprint day was a total blast. I talk a lot about skiing being fun and I know many of you out there are rolling your eyes…”how can being nervous hours before the start, racing your absolute hardest and pushing yourself to the point of throwing up after a race possibly be fun?”. But hear me out. Those days when everything comes together, when you feel like you’re pushing yourself to a new level and enjoying the atmosphere of a World Cup, realizing “holy crap, my job is so cool and I love it!” and executing your race plan just the way you want to…that is FUN. You don’t have to win to have that feeling, either. I’ve had just as much fun and felt great about races where I’ve been not even close to a PR, because the day went right in every other aspect. Training on the Lahti sprint course before the races (Hansi photo) Cork and I in the finish pen (Narum photo)

And so many coaches, techs and athletes from other teams were so kind to me and so happy with me, which means a lot! It’s so fun when the people you race against are truly happy for you when you have a breakthrough, just like I love seeing my friends from other countries have their best days. This photo of the techs having their champagne toast after the sprint is one of my favorite images of the weekend, because these guys work so hard behind the scenes and never EVER receive enough credit for what they do. But they’re celebrating quietly in the corridors of the wax cabins, away from the media in the stadium where they do all that hard work that makes everything you see on TV possible, because they know they did a good job. And I think it’s important to share with the rest of the world what a great job they’ve done. Soph and I joking around before hitting the trails (Narum photo)

So, the sprint: the course was long and a hard one because it had 3 good climbs in it, and with all the snow falling it made tactics quite important. It became difficult to pass because the best line was skied in and fast while taking a long line around a corner was made doubly slow in the new snow. I liked the longer course a lot, however, because as a distance skier and a sprinter it was the perfect mix! I had my best qualifier in a long time, in 2nd, and then proceeded to race the quarters and semis right behind Falla right into the final! I was having trouble getting off to a quick start, but I had amazingly fast skis and one of my strengths is knowing how to ski downhills with corners fast. So I played to my strengths, using the draft on the last downhill into the stadium to pass and come into the finishing lanes with as much momentum as possible. Heading up the last big climb of the course (Hansi photo) This strategy worked for a lot of people all day, and it held true for me in the final as I was able to get my own lane in the finishing sprint! I was so excited to have a chance to sprint it out for the podium, and threw my leg forward in the best lunge I could manage. I didn’t know if Heidi or I had won the photo finish for 2nd place for a long time, and I wasn’t worried about figuring it out just yet – I was too happy with having such an exciting race, and finally making the sprint finals! Coming into the lanes 4 across (Narum photo) The lunge from the side (Hoff photo)

Then there’s this: I was lucky enough to meet the President of Finland. After the skiathlon a man in a plain black winter jacket came up to me, shaking my hand and congratulating me on the sprint. He said it was so nice to see new faces on the podium and that he was happy for me. I thanked him and then learned that he was the President of Finland! Wow! It was so cool that he was there at the race hanging out, cheering on his athletes and meeting those from other countries. The 15km skiathlon was much less fun for me, unfortunately, for a mixed bag of reasons. That’s ok, though – not every race is going to be amazing! I was tired physically from the day before (and from racing nearly every race this year…gotta pay for that at some point!) and I was tired mentally and ready for a break at home. The way the classic part of the course skis – at least, in heavy snowfall – made the accordion effect in the pack even more pronounced and after each downhill into the uphill everyone was running into the backs of someone else’s skis. The skate half was really hard to get around people and pass if someone was really aggressively blocking, and I wasn’t skiing with my best technique. So it wasn’t a very good race for me, not because of the result but because of where my head and body were at and because it just wasn’t fun out there, as opposed to races where I’ve finished much farther back in the pack but had a lot of fun and raced a gutsy, smart race. I try to never judge a “good” race or a “bad” race based on result but based on how I performed with what I had on that day, and by the overall experience. That’s just my opinion, but I’m usually proudest of the things that you don’t see on the result sheet at the end of the day. Our team functions really well as a unit and that’s so important to me!
Before races started we had some fun training days in Vierumäki, Finland, where we were staying at the athlete village for next year’s World Championships. Jennie, Ida, Sadie, Sophie and I out for a cruise! The woods were beautiful. Pre-strength warm up jog with the crew – Jennie, Scott (Noah in the back), Caitlin and Erik. Reese sledding down the old abandoned ski jump we found. Jennie and I enjoying the dance disco downstairs in the hotel! (photo from Caitlin) So now we’re headed home to the US of A for a short break (4 days) before going to Canada to begin the last tour of the year! A huge thank-you to our volunteer techs Eli Brown who was with us for 3 weeks, and Assar from Estonia who is our lucky charm in Lahti each year! Anna Giguere volunteered 3 weeks of PT work for us on the road again this year, and I’m so grateful! Greg Schumacher came as our Doc for the week as well. We also had some guests for the weekend: nearly every photo on this blog is from Hansi Johnson and Richard Narum who are skilled photographers that came to cheer and shoot this weekend and are letting us use all the photos they took! Thanks guys!
Share Tweet Share Pin