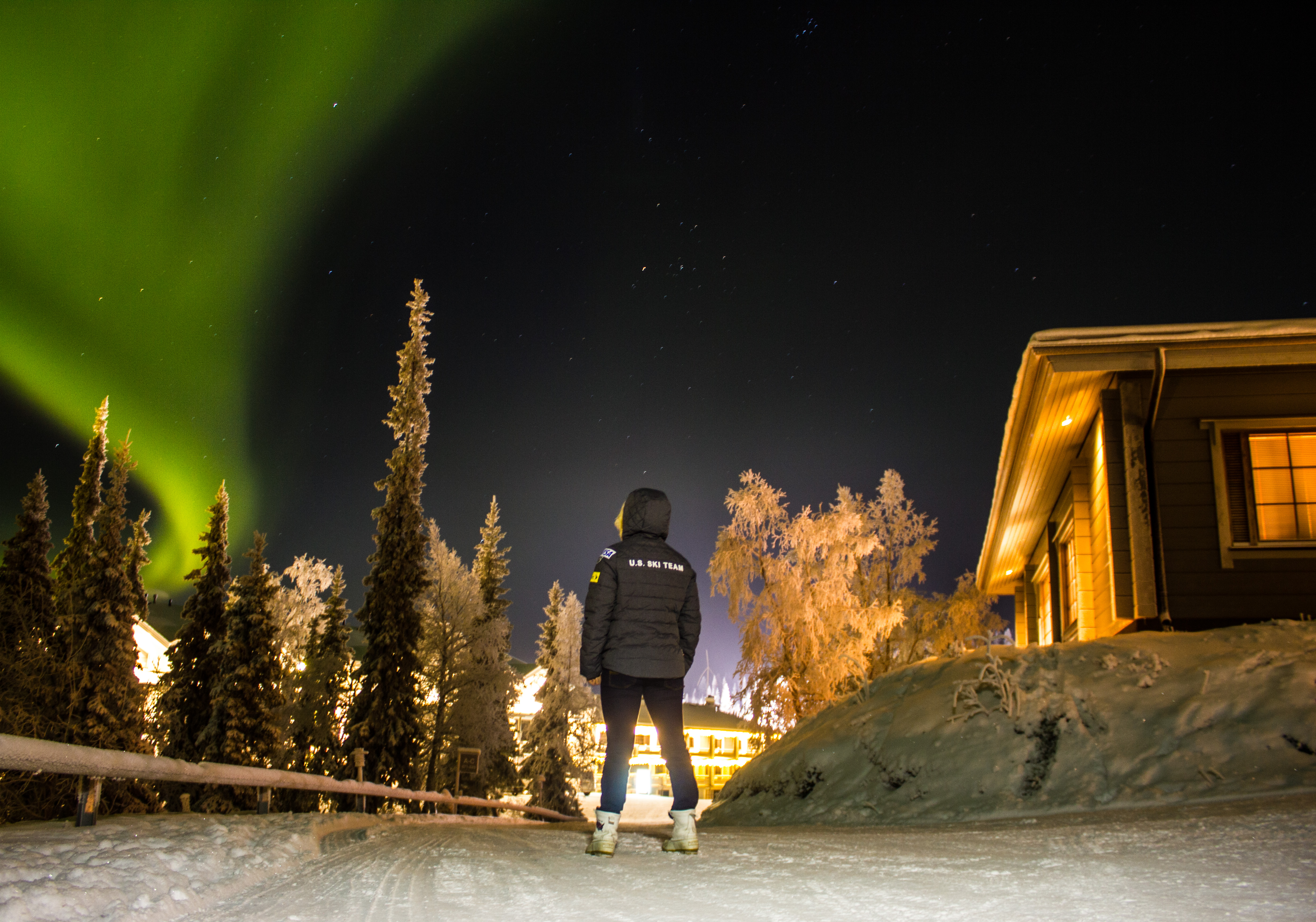 Lapland and the Northern Lights situation

Here we are – on the road again! Hopefully I can give you a glimpse through my writing into life on the World Cup. We bounce around from place to place but there is always something new to learn about each country and venue, even if I’ve been there before!

The other night I walked out the door, looked up and started freaking out. After two years, I was finally seeing Northern Lights again!!! I ran around to all the cabins, banging on doors and pulling people outside to look at them. They were only bright green for a short while then faded, but Reese is really REALLY good with cameras, and with a longer exposure he found a way to show the colors! Here is one of the super cool shots he took: As you might have noticed from the Northern Lights, we’re pretty far North in Lapland! This week we’re spending in Muonio, Finland. Although the cabins we are living in are actually a few kilometers away from the town of Muonio, so it’s pretty isolated here…a little resort area in the woods. A frosty stretch of tracks

In addition to cabins, there is a hotel, waxing garages, cabins and a restaurant where all the athletes eat. We usually are served buffet style on the World Cup, which is easiest for everyone since people come in from training to lunch at various times and we all like different foods. One of the funniest things to me is when google translate doesn’t totally work out at the buffet table. Slow-cooked pork is labeled as “overcooked pork” and there are also “mixed meats stew” that all taste pretty good but can be a little misleading! The view from our cabin door on a “bright morning”! I’m really into the crooked “Dr. Seuss tree”.

Speaking of foods, we visited an elementary and primary school in Muonio and spoke with the kids there. We asked them what the best Finnish food is, and answer was unanimously reindeer with lingonberry sauce. We then asked them what their favorite US food was, and right away: “hamburger!!!!” So there you go. Our fast food reputation proceeds us. We talked to the kids about skiing, and showed them our Taylor Swift goofy music video we made, as well as a video Andy made of the glacier camp this summer. And they had a special surprise for us! Four of the girls did a dance with scarves and matching outfits, and it was really awesome. It was cool to come back to the school since we had visited two years ago, and now it’s become sort of a tradition! Talking with the kids and trying to learn some more Finnish words while they practice their English on us. (photo: Matt Whitcomb)

A couple fun things I’ve been learning about Finland over the years…the “Angry Birds” game was invented in Finland so every store has stuffed toys, stickers, and tummies shaped like little frustrated winged creatures. And all the trees are covered in thick white frost, because of the “ice fog”. There’s probably a more scientific name out there for this phenomenon, but on our team it’s known as the dreaded Kuusamo ice fog. This is when it’s really cold outside but also pretty humid, and there’s tons of tiny ice particles in the air that freeze to your clothes and coat your glasses in a icy sheet. It’s when your eyelashes get too heavy from all the frost! Matt and I out for a skate (photo: Reese Hanneman) A view of where the sun hits (hint….it doesn’t hit the trails directly)! (photo: Reese Hanneman)

I’ve also had people ask me if we learn other languages on the road. And my answer is usually only a couple of words. I know exactly two words in Finnish, as it turns out. Hello: “Moi moi!” pronounced “moy moy” as in “toy” but with an “M”. And thank you: “kiitos” pronounced “key-toes”. So that’s the extent of my Finnish speaking skills…for now, anyways!

We still lift weights and do strength twice a week in the winter, because skiing fast means having power and to be powerful you have to be strong. The gym in Muonio is in the police station, so the whole crew of us shuffles on into the station and lifts weights there. It’s pretty fun, and I really like doing strength, especially in the winter. It’s a chance to train while getting to really talk with your teammates and trade off between blasting Taylor Swift and Rock and Roll music. Erik posing on a somewhat sketchy lifting contraption he made.

One of the popular and efficient (and, in my opinion, very very fun) modes of transport in this town is by spark sled. It looks like a cross between a razor scooter and a sled, where you stand on the back and on the flats you push yourself along with one foot. Whenever we go to the grocery store we see little old ladies cruising down the street on their spark sleds, with their grocery bags loaded on the front. I think it’s awesome.

Here’s an admittedly creepy shot of a sledder we took out the car window.

Yesterday some of us did a classic time trial, and I did a 10km. It felt so good to be going hard and fast again! I have been putting in a lot of work on my classic technique over the spring, summer, and fall, and our coaches have been really creative in helping me find new ways to improve. So when the time trial went really well and I finally felt like I was striding instead of bouncing along, I was pretty psyched! Smiling and striding after the time trial. (photo: Matt Whitcomb)