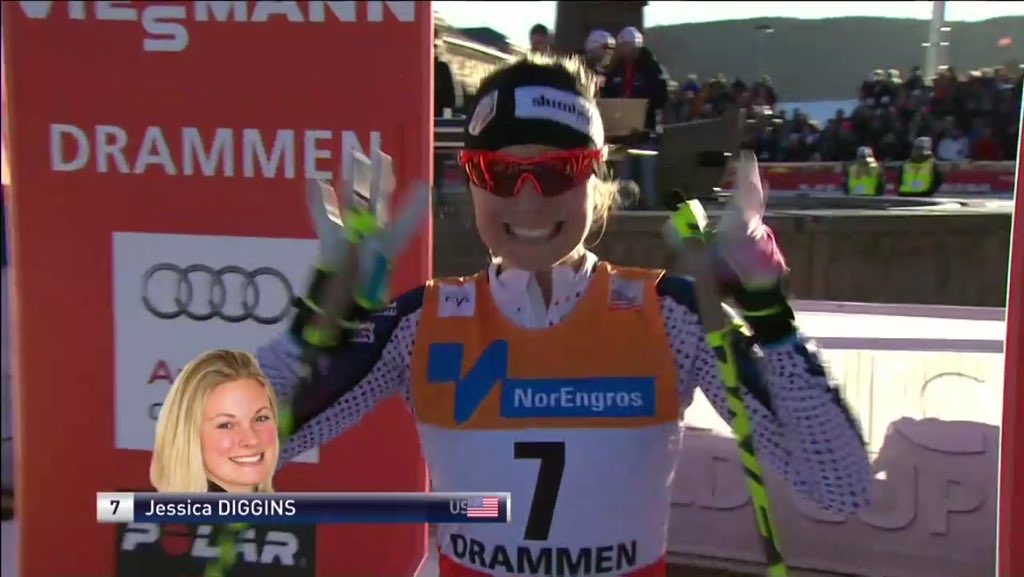 It’s all so classic!

From here on out, the racing gets pretty fast and furious. Last wednesday we raced a city sprint in Drammen, Norway, then on the weekend raced 50/30km classic races at the famous Holmenkollen venue in Oslo. We have another mid-week city sprint coming up in Stockholm, Sweden before we race two distance races on the weekend in Falun! THEN, we have one more weekend of racing in Lahti, Finland before we go back to North America for the final tour of the year. Whoo! It’s going to be a lot of changing venues and exciting races, which is so much fun this time of year. I’ll catch you up on the Norwegian races, mostly in photo format. New skis! New skis! I was pretty excited to be testing. The boys at the top of the course in Drammen.

Drammen is always such a cool race, because they shut down the city streets, truck in a ton of snow, and fans line the course. The race goes up one street, around a beautiful old church, then bombs back down before climbing back up and ending on the steps of the church in a steep little hill. The drop-in to the downhill, lined with fans along the side.

They made a new downhill this year that drops in a little more sharply, with a banked corner. I though it was a TON of fun and it skied really well, although when it was a little icy early in the day you’d see everyone with their “caution hands” out to the sides. Looking down the course towards the start line. (It’s more of a climb than it looks in the photo)

I was totally thrilled to have my best sprint qualifier of the year….in a classic sprint, of all things! I mean….what? I go 4 years without ever qualifying in a classic sprint then suddenly things start to click? I’ll take it! Sophie and I – first time qualifiers in Drammen! (photo from Sophie) Simi made the semifinals! Here he is at the top of the course.

We found some adorable little fans to give our bibs to, and they were pretty psyched to be cheering for USA! Then we packed up and moved to another hotel in Oslo, at the top of the hill next to the stadium. Which is awesome! I love it when you can just walk over to training each day. Checking out the stadium on our sunny training day. Sadie giving JP, her tech, a ride on her skis. What the stadium looks like on a perfect day!

The Friday before the races, the US girls had a really cool opportunity to learn about the awesome work of Aktive mot kreft, or “Active against cancer”. This organization provides workout rooms with trainers and classes to help cancer patients improve their recovery and overall happiness by staying fit and active during treatment! We joined a group of four that are training for a bike trip this spring, and it was so incredibly inspiring to see them so dedicated to their goal, looking forward to the trip and working hard to get there. I was asked to lead a spin class, so we did some fun little pickup intervals and it was great to get to know the trainers and patients better! I’m so very impressed with the positive attitudes and hard work of Aktive and I think they are making a huge difference. The group after we were done spinning! (photo from Liz) Then it was time to prepare for the weekend races!

Enjoying the view from our hotel room the day we checked in. The races in Oslo were, unfortunately, very very difficult to see. It was crazy foggy for both the men’s and women’s races, and it even rained during ours! None of our US girls had great races, and it wasn’t just because we were struggling with finding fast skis in some very tricky waxing conditions. Having come off a large training block the week before, I knew that I’d be carrying a little bit of fatigue. I knew that it would be more likely that I could get away with sprinting fast but that a 30km might feel a little different. My focus is set on races near the end of the season, so at some point I had to make the decision to put in a little more training and risk the races immediately following, if I wanted to give it my best shot in March. So I’m happy with my decision, and even though the 30km classic didn’t feel like a good race for me, it was still my best result to date in a classic 30km…which is encouraging because it means my classic skiing is starting to catch up!

FIS made a short and sweet little “inside the fence” video that takes you behind the scenes before the World Cups even start, detailing how athletes prepare. They followed me for the profile, so if you’re curious as to what the twelve hours before the start looks like…check it out! If it doesn’t play here, try the youtube channel: https://www.youtube.com/watch?v=WEZYYxD_SD8

Now we’re on our way to Stockholm. I love this town because of the old city, all the cool museums and history, and of course it’s always a good day at the office when you get to race up and down the Palace steps!