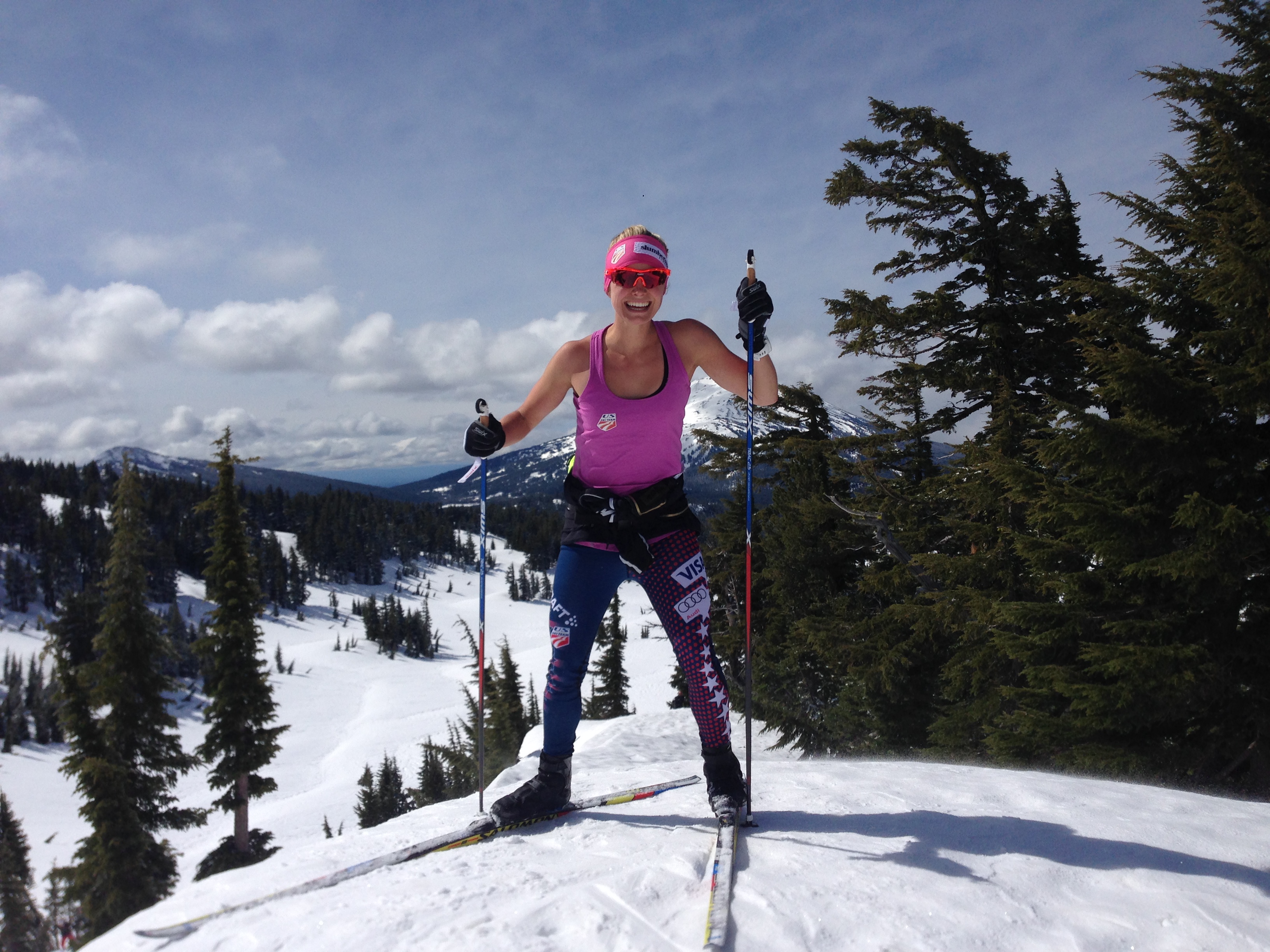 The return to snow has been a pretty wonderful thing for me. After the initial 10 minutes of awkward stumbling around and getting used to being on long skinny skis instead of roller skis again, everything felt great! Our first US Ski Team camp of the year in Bend, Oregon is off to a good start. Rosie, Me, Sadie, Ida, Jenny, with Broken Top mountain in the background. (photo by Fish)

Today was one of those days that I’ll remember for a long time, because we had an awesome adventure ski with a really fun group of people. We do a lot of really focused training at camp, so it’s important once in a while to get off the trail and have fun. And as it turns out, crust skiing over bumps, hitting jumps and learning to turn around trees on steep downhills is really challenging for balance and stability, and I think it’s super important to get better at! Our goal was to climb up into the bowl of Broken Top mountain, and we were pretty set on getting there. So happy to be out skiing through the woods and mountains! (photo from Pat)

We started at the Mt Bachelor parking lot and after getting to the low point of the ski trails, went off the edge of the trail into the woods and started weaving around trees. We crossed Todd Lake, which was one big adrenaline rush for me because there were melting patches of ice! It was super solid ice over most of the lake, but it didn’t look as solid as it was. I sprinted over the whole lake certain that the swishing sound of my drink belt was in fact the ice breaking underneath me. I sometimes wish my imagination wasn’t quite as strong as it is. 15 minutes into our ski and we are PSYCHED! Todd lake. Not totally frozen, but solid enough. Broken Top is the mountain way in the distance. The group crossing the lake.

Then we had a big headwall to climb up, and the bottom of that is where Matt snapped his ski in half. But luckily Pat had brought some tape with him, so they snapped the tip off, placed it slightly lower and taped the whole thing together. I was amazed that Matt got up the mountain and down again with only one working ski (and two different ski lengths!) but he’s really, really good at gliding down a mountain on one foot, as it turns out. Matt and the amazing tape job.

When we finally got up into the bowl, we climbed as high as we could go and be certain that the snow was safe. It was really windy but so beautiful, and such an amazing feeling knowing that you skied yourself up to the top under your own power! Sure, a chairlift would have been easier, but all the way down the mountain I appreciated every turn more, knowing how much energy it took to get up it in the first place. Matt on a river crossing Anne Hart and I – the two Minnesotans getting after the mountain skiing! The group by the rocks in the bowl. Sadie and I trekking up into the bowl! I have only gone crust skiing one other time in my life, so my alpine skills sans metal edges were not so very pretty, thanks for asking. But, after falling a few times, and giving myself a lot of pep talks, I made it down the mountain and even sent it over some jumps! I got so excited when we found a nature-made half pipe that I climbed back up with Matt and did it again. We made it back in 3:45 hours, which was about what we were expecting! It was a great day, and I’m so happy we did it.

Speaking of things I’m really happy about, guess who I just signed with? Swix! I will be racing on Swix poles and gloves through the Olympics and next two World Championships. I’m excited to work with them to create a signature line of equipment as well, so stay tuned this fall for an update! Happy with the new Triac 2.5 poles! (photo from Matt Whitcomb)

Now, you’re probably wondering what a typical day of camp looks like. In the morning, we drive up to Mt Bachelor, watch a little video to get our minds in the right technique zone, then go ski for 2-3 hours. It’s different for every body, because each and every BODY at camp is made to train at a different rate. Some people need a lot of long slow hours on skis, and some people need less, and some people need more intervals. But in general, most people go around 2.5 hours in the morning. Then, after a big lunch and a nap, we’ll head out in the afternoon for either a strength workout in the gym, or an easy 1.5 hour run/bike. This camp is focused on getting lots of time on snow and long slow training sessions, and as a result everyone is getting pretty sore and tired by this point in the camp. But that’s why we have a rest day mid-camp! Working on my gliding and striding. (photo from Erika Flowers) Local high school skiers took a day to come ski with us! It was really fun having them follow us on the trails. (photo from Ida Sargent) Ida, Sadie and I ready for a rainy run in the afternoon! (photo from Cork) Excited for some SUNNY skiing! (photo from Pat)

Our two new members of the US Ski Team, Hannah Halvorsen and Ian Torchia, have been doing an awesome job. I’m really psyched to have them here at camp and on our D team! Everyone wiped out after a long, long ski! Parking lot frisbee while we wait for everyone to load up equipment.

Training has been awesome, but that’s not to say that everything this camp has gone perfectly. I think sometimes you look at athletes on social media (or just people in general!) and you only ever see the best parts. It’s a highlight reel, a seemingly steady rise to the top. But that’s rarely, if ever, the case. That’s just not how life works! There’s always going to be little setbacks and obstacles to go over or around.

This camp has had a few for me so far – one of the bone spurs on my heels flared up after a few days of slushy skiing and I had to visit Rebound Physical Therapy in Bend for some help. Luckily, I asked for help right away, as soon as something didn’t feel right, and the inflammation in my heel is already going away and the wonderful PT’s at Rebound have helped mobilize my foot and take care of the problem. I also got food poisoning a few days ago. This was a big bummer. I don’t remember eating anything super weird, but when it happened, there was no doubt about what had hit me. It was a brutal couple hours but after a big, big sleep and focus on rehydrating and taking it super easy on my body the next day, I was able to bounce back really quickly. I’m not sharing this information to gross you out or get any sympathy – but it’s important to know that it’s not always easy and it’s not always roses. And that’s ok.

I’m excited for week two of camp and you can bet I’ll be keeping my fingers crossed for another crust cruise opportunity!