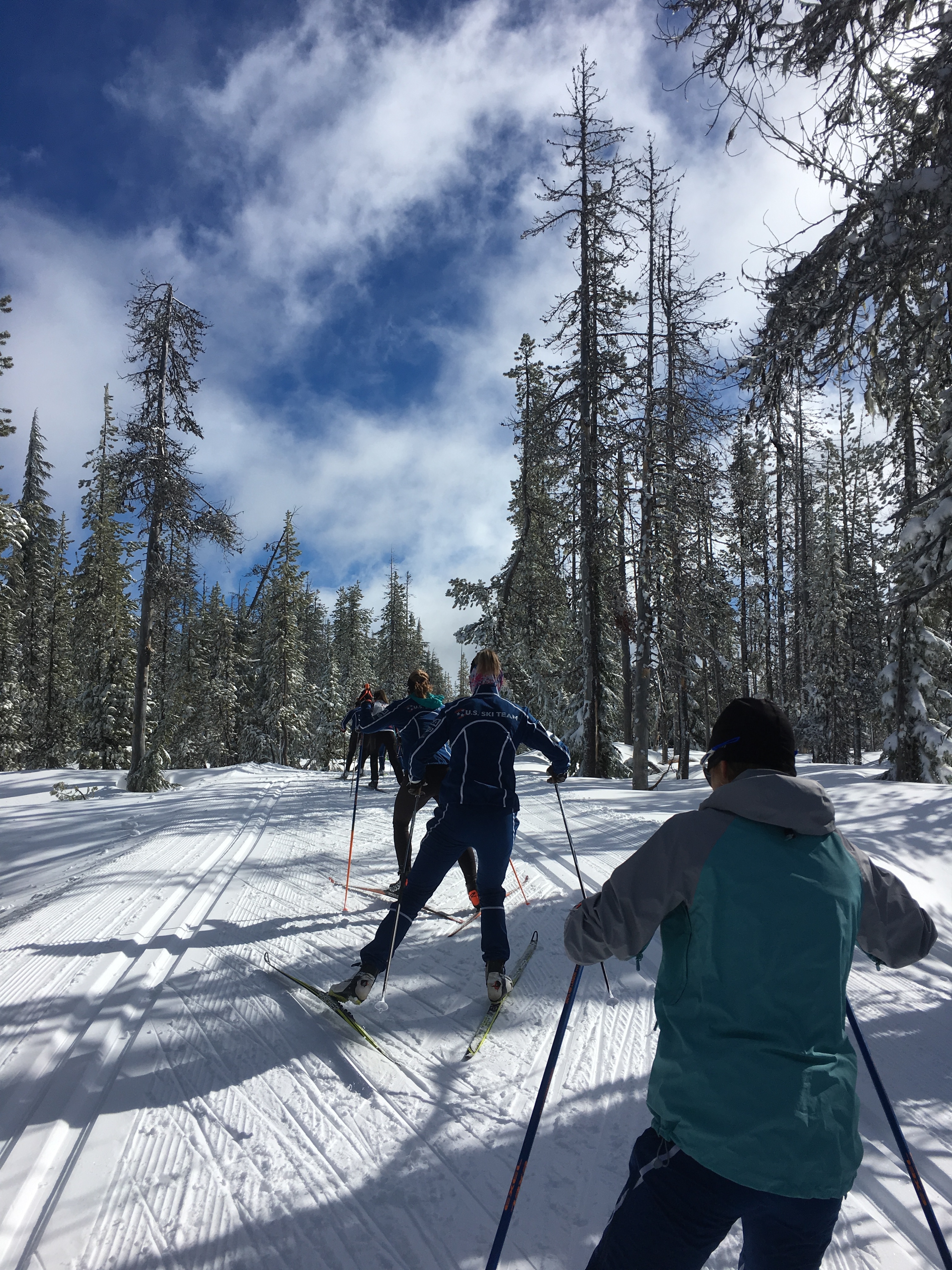 Charging up for another summer

By Jessie May 20, 2017 No Comments
Here we are again…me, on a sunny deck in Bend, Oregon stretching out my tired and sore legs and you reading about the craziness that is on-snow skiing in May! But first, a recap of all things that happened between April and now. Group ski on the trails at Mt. Bachelor. The snow here is amazing!

This spring I got the mental break and total separation from skiing that I find myself needing every year. I think the winter competition schedule is so much fun and it’s exactly what I want to be doing (I mean, it HAS been my dream job since I was a little kid) but…it’s also incredibly draining. The kind of intensity and fierce mental positivity I need to bring to every race all winter long is sustainable over the course of my career ONLY IF I get a chance to totally unwind in the spring. So that’s exactly what I do!
After my adventure-filled trip to Hawaii with my friend Danielle and my quick stopover at home in Minnesota, I flew east for a few weeks in Boston with my boyfriend, Wade. I never grew up a city girl and I highly doubt I will ever truly turn into one. Nevertheless, I found myself really enjoying living in Southie where I could walk a few blocks to the beach and spend an hour doing yoga by the ocean, watching the kite surfers catch air and dash around Castle Island. I really liked the fact that I could walk to a grocery store in 10 minutes and took advantage of that, trying out a lot of new recipes and spending some fun experimental time in the kitchen. Most of all, I just liked being able to live with my boyfriend and spend quality time with him. I also learned the art of watching NHL playoff hockey instead of thinking about skiing. Biking around Boston with Wade!

In the middle of those weeks in Boston I took a whirlwind tour of the West. I had a quick stopover at the Colorado Springs Olympic Training center where I worked with our team dietician to hone in on a few hydration details that will hopefully make my training much more productive. For example, drinking only water during training that lasts an hour or longer is better than nothing, but it’s not great. At all. Your body needs electrolytes and salts to replace what you’re sweating out (and if you sweat a lot like me, we’re talking about a lot of salt!). And to further complicate things, everybody’s sweat has a different concentration of salt in it. So, while I may be a big sweater and you might sweat only a little, I might only lose a small amount of salt while yours may be concentrated and therefore you might need even more replacement salts than I do! Weird, huh? Cooking with Susie Parker-Simmons in the Team USA test kitchen!

You also need to be taking in 30-60 grams of carbohydrates per hour (most people hover around 45 as an optimal intake) and while that might sound like a lot, your typical sports drink probably has you covered. I like to use Nuun because I can adjust the number of carbohydrate tablets I drop into my water bottle, as well as the amount of electrolyte tablets I put in until I know I’ve got my optimal range. This little piggy…almost came home with me. 🙂 They had baby animals in West Hollywood, and it was the best station by far. (photo from Courtney Harkins)

Then I flew to Hollywood for one of the craziest events I’ve ever been to. NBC rented out studios and all the channels they own were there to get photos, stories and intel on the upcoming Olympics. For me, it was really fun to talk about how cool Cross Country Skiing is as a sport, and share the love for Nordic! I also got to talk about how our awesome team lifts each other up and how I’ve basically had the chance to grow up on the road surrounded by big sisters and role models. I feel so lucky! Then I headed North to Aptos, California for a weekend of celebrating Erika Flower’s soon-to-be wedding to Andy Newell! I love both these teammates of mine so much and I cannot WAIT to see them get married. In the meantime, there are lots of fun things to do before the wedding, like going surfing and boogie boarding with the bride to be on the beach! Much love for this beautiful bride to be! (photo from Annie Pokorny) Ruka and her ladies. (photo from Annie Pokorny) Also, the sunsets were amazing! (photo from Annie Pokorny)

California was such a good time, but I wanted more time with my boyfriend before the official training season began so back to Boston I flew for another wonderful week. Then, on to Minnesota for 4 days with my family (and shooting an episode for Salomon TV…more details on that to come later this summer). THEN, because I’d like to brag a little more about how good I’m getting at suitcase-living, it was time to head west to Bend, Oregon for our first US Ski Team camp of the year! This was the spring of meeting piggies, apparently. (photo from Wade) Mom with Leo at home. So cute! Baking pies (and eating them).

The first week of Bend camp has been really amazing skiing. For me the best part is always the chance to get together with the team and reconnect with everyone. Team bonding is important, you know! Stay tuned for another blog post soon with more photos and details from our fun crust cruise adventures in the mountains! Working on that balance! (photo from Kikkan) This is WHY I’m working on balance – although this happened trail running. (photo from Cork)

Paddy and Erika soaking in the winter wonderland! Andy organized a piñata for Simi’s 30th birthday at camp. It was amazing. After battling mono, broken bones and another round of sickness it’s so awesome to have our teammate Ian Torchia healthy and with us again! Yeah buddy! (also, so stylish on this blustery snowy run).