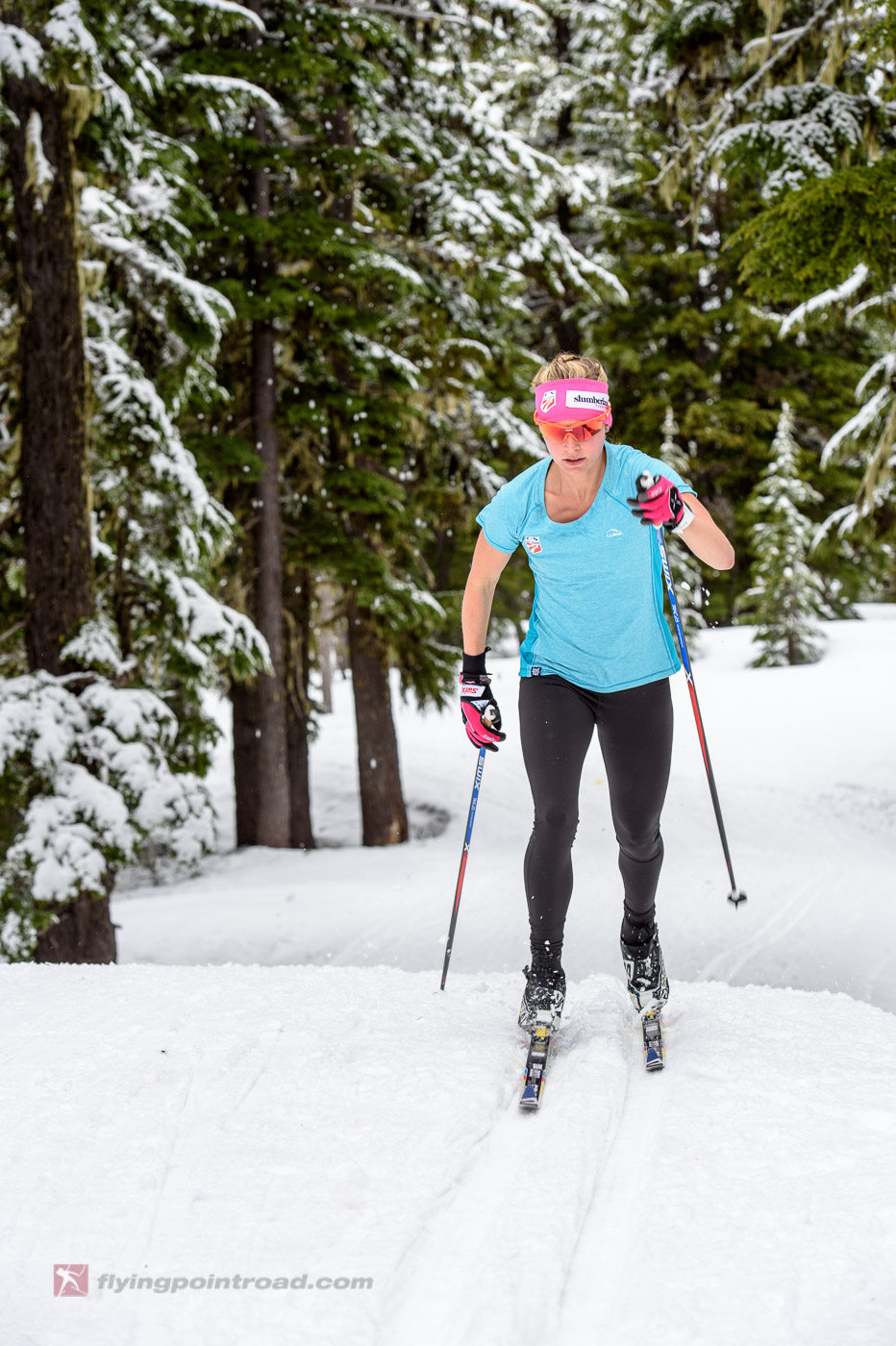 By Jessie May 28, 2016 No Comments
That was an outstanding training camp. It was nice to return to Bend after a year with low snow, and what a treat to get enough snow left to crust ski! Annie, KO and I enjoying a sunny slush ski!

It was a tough camp, though. I’ll be honest…it was a lot of training, and there’s a fine line you have to walk between pushing your body as hard as you can, and not overdoing it so that you can still recover and come back stronger after a rest week. It’s really hard to find that line, but that’s part of being an athlete. Finding that confidence and belief in your plan, and then being ok with keeping your training plan flexible, is part of being an athlete. It’s not always “go, go, go”…it’s having the smarts and body awareness of knowing WHEN to go and HOW FAR, and then taking charge of recovery time and prioritizing rest when you know that’s what you need most. If it were just about training as many hours as possible, or doing the most intervals, it would be easy. Because that’s not the hard part of the job for me. I love that part! Getting my hips forward in double pole speeds! (photo from FlyingPoint)

Speaking of the intervals, we focused mostly on getting volume during this camp – lots of long easy paced skis where we honed in technique ideas and worked on finesse when it comes to making tricky wax days work. But I had a few sessions that really stood out to me as productive and encouraging. On a tricky wax day, I decided with Cork that I was going to do some low level 4 intervals. It was slushy and hot and I had to work to find the kick, which is usually the conditions I fall apart under.
And…I’m pretty convinced it was the best classic skiing I’ve ever done in my life! So even though I was bent over my poles at the top of the hill gasping for air, legs and arms aching and feeling totally worked over, I had never felt better. I’m still working towards truly loving classic ski racing, but I’m getting there, because every time I keep chipping away at this technique it feels a little more natural. It’s a weird life I’m living sometimes, full of oxymorons. The things I would normally hate most – being winded and in a lot of pain from going my hardest, working on something I used to despise – bring me the most satisfaction. Doing a speed over a short, steep hill (photo from FlyingPoint)

***for those of you wondering what Level 4 is, we break intensity down into 5 “levels”. Level 1 is your easy pace – you could ski/run/bike like that for hours. Level 2 we don’t really train in, and it’s where you’re not totally comfortable but could still go for a while. Level 3 is just below race pace, and you can’t really talk but you could also keep going for an hour if you had to. Level 4 is race pace, and it’s really tough. These intervals are usually 2-6 minutes long. Level 5 is sprint pace, the fastest you can go for 10-15 seconds. Annie, KO and I doing a little Level 1 training (photo from coach Pat) Rosie and I running to the falls (photo from Erika)

One of my favorite workouts was an easy jog one afternoon that a group of us did. We went up to Tumalo Falls, in the Deschutes National Forest. The falls were massive and when you looked at it you couldn’t focus on anything else. Or hear anything else above the crashing, for that matter. We found a trail that took us around and right to the base of the falls, where you could sneak around behind them! I got totally soaked inching along the grimy mossy wall. I love this sort of thing. The waterfall was huge! (photo from Erika) Getting soaked, having fun (photo from Erika)

Another fun day was a speed workout, where LL Bean came to shoot some photos and video. We were given new summer gear from LL Bean and Craft, and it was fun testing out the new tights and jackets in all sorts of weather up on Mt Bachelor! I love that this is sewn into all our team training clothes. It’s the best reminder of why we work so hard!

We also took an afternoon to do our annual Fast and Female event in Bend. The boys ran a Speed Camp while we were doing Fast and Female, and this has been the pattern for the last few years now – we all reach out to get young kids fired up about sports any way that we can! Jumps and strength at one of the stations. (photo from Steve Fuller)

As usual, during the fitness station part of the event, I ran the dance station. We did a sort of “follow the leader” dance and I got to live my dream of being a dance teacher and it was GREAT. The other stations included strength and jumps, soccer, and obstacle course relays. During the Speed camp, the guys had a similar theme with mobility (it’s basically dancing, let’s face it), strength, agility and ski bounding technique. Big thanks to Steve Fuller for coming out to take photos of the events! Ian our rookie getting initiated into speed camp leadership. (photo from Steve Fuller) Hannah and KO, our youngest girls, joined me for some crust skiing the second to last day!

I’m on my way back to Stratton, Vermont now for a solid block of training with my SMS teammates. We are so lucky to have such a great training environment there, as well as some incredibly hardworking coaches and people on the team. Everyone looked so strong and fit and ready to go in Bend, and it’s gotten me super excited to see where we can take it this summer!
Share Tweet Share Pin