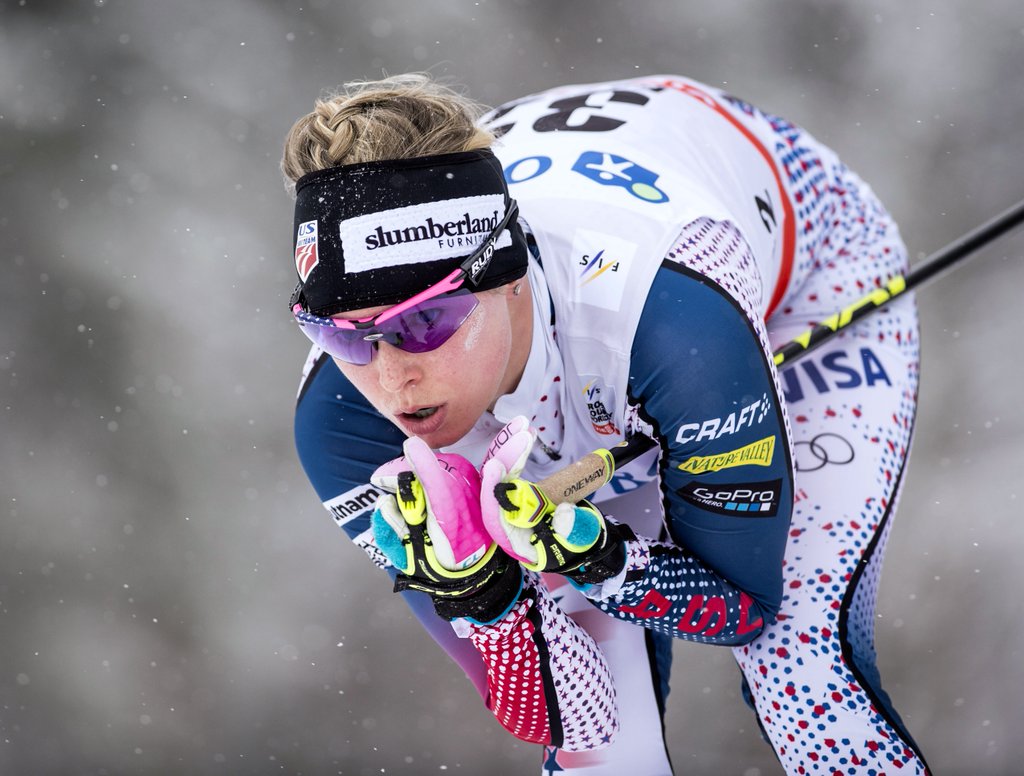 The past weekend of racing in Falun was a ton of fun for me. I have great memories from racing at the venue here, not just from World Championships last year but from World Cup finals in years before. The courses are challenging, especially with the Mörderbacken “killer hill”, but they are also fun to ski because they have fast but ski-able downhills, good corners and the fans lining the hills always give you a boost of energy! This is what my own little “boost of energy” looks like! (photo from Jennie Bender)

This time of year can be a little tricky because everyone starts getting quite homesick. Don’t get me wrong – I fully realize that I am living my dream job and I’m so happy to be here and be racing! But sometimes it can wear you down a little bit when you’re always living out of a suitcase from hotel room to hotel room, and you start to really miss being in a home and being in your home country. So although I’m very much looking forward to getting back to North America, it was important for me to be able to separate that from race day and focus only on being excited to race and ski fast. When you need every bit of energy and focus to compete on the World Cup it can be a huge disadvantage to waste mental energy thinking about something in the future (or past, for that matter) when you’re preparing for the start! Pre-start hair-braiding. It’s part of my routine! (photo from Sadie)

On Saturday we raced an individual start 5km classic, and it was by far my best classic race in my life, because of more than just the result. It was one of those races where I simply felt good, and was confident in my ability to kick up all the hills and have a strong double pole everywhere on the course. It took a lot of self-delusional-pep-talks at the beginning of the year to convince myself to like classic racing. I’m finally coming into a stage where…ok, fine, I still need to talk myself into it, but this time I’m believing it more and more! I came in 5th on the results sheet, but it’s a testament to the dedication and hard work of our staff that I was only 8 seconds from the podium on a very tricky waxing day! There was new snow falling over man-made tracks, and I’m so proud of our techs and coaches for spending hours and hours working so hard to give us the best chance possible against countries with double the wax staff and budget. Those guys are the unseen heroes of the day. All focus on those downhills (photo by Getty Images-Trond Tandberg)

Sunday was the day I was reeeeeeeally looking forward to, because at the end of the day I will always hold a special place in my heart for skate races. And we hadn’t done a mass start skate race all year…in fact, I can’t remember the last time we got to do a mass start in skate! We do them in classic all the time but I was pumped about a skate because it’s such a great chance to learn about your racing. You can see exactly where the race leaders are, where they are putting time on you and where you are putting time on other people.

When the gun went off Therese led the pace like it was a sprint race. Being a girl and racing on the World Cup is hard, people. I decided to take a chance, throw conservative tactics and pacing out the window and just go for it. I tried to stay with the leaders as long as I possibly could. The first time up the biggest climb I got dropped, but then made time back and caught up to the leaders on the sprint course, right before the 5km mark. First lap through the stadium (photo from Graham Longford, via twitter)

I couldn’t hold the pace any longer and started to drop back, and from there on out I focused on forcing my tired body to make it around the course before the chase pack caught me! I knew they had a big advantage skiing in a pack on the downhills, but I was so fired up I was able to make it to the line in 4th. Was it the smartest move ever, trying to stay with the leaders and then risking an epic blowup mid-race? Nah, probably not. But I was proud of myself for taking a risk and on the right day, I know that I can stay up there. Signing posters at a snow kids event after the races.

And before Falun? We got to do the Royal Palace sprint in Stockholm. Seriously, people. Could there be anything cooler than racing around a palace? I think not. I was so happy to have qualified in Stockholm for the first time (I’ve tried twice before!) and in the heats I think I was an unfortunate combination of being just a wee bit tired from the 30km and going for more grip wax than I should have because the long uphill finish made me nervous. So I didn’t move out of the quarterfinals, but I was happy to have gotten 15th in a classic sprint! Happy to be in Stockholm! (photo from Sadie) The first uphill of the palace sprint. Looking down towards the start line, with the wax trucks in the background.

We’re in Lahti, Finland now for the last weekend of World Cups in Europe! I’m excited to race two more times and then have a week to recover before starting the Tour de Canada. The travel day glory of Tim and Andrew. (photo from Sophie) Jenny making some friends at the store.